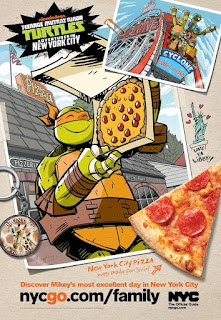 NYC & Company, New York City’s official destination marketing organisation, together with Nickelodeon, announced the Teenage Mutant Ninja Turtles will continue their role as Official NYC Family Ambassadors for a second year, commencing a refreshed campaign to highlight New York City as a family-friendly destination. The first-ever Ambassador to embark on a two-year partnership, the new campaign features new Teenage Mutant Ninja Turtles artwork, exciting family-friendly itineraries across all five boroughs, interactive SMS messaging with exclusive content, and more. Since the launch of the Family Ambassador program in 2009, family travel to NYC has seen steady growth, and in 2015, family visitation made up 22% of total visits to the city. For kid-friendly NYC itineraries, attractions, articles and more, visit nycgo.com/family.

“We’re excited to have the Teenage Mutant Ninja Turtles welcome family travelers to NYC for a second year, this time with richer NYC travel content and interactive features for visitors,” said Fred Dixon, president and CEO of NYC & Company. “Just as each family visiting NYC has their own unique interests, each Turtle has their own favourite activities across the five boroughs, and we’re pleased to bring those itineraries to life for our visiting families.”

“We are thrilled to continue our partnership with NYC & Company, with the Teenage Mutant Ninja Turtles assuming the mantle of New York City Family Ambassadors for a milestone second consecutive year,” said Pam Kaufman, Global Chief Marketing Officer and President of Consumer Products, Nickelodeon Group. “New York is a family vacation hotspot, jam-packed with exciting things to do on every corner so it’s a no-brainer to have the beloved Turtles who know the ins and outs of the city, serving as ambassadors and representing the fun and adventure that can be found on these iconic city streets.”

With personalities ranging from adventurer to foodie, each of the four Teenage Mutant Ninja Turtles has their own favourite destinations to discover across NYC, and now family visitors can too. Itineraries and maps catered to each turtle are featured on nycgo.com/family, providing families with tools and inspiration to plan their own NYC adventures. Five new creative posters feature itinerary-style illustrations of each Turtle’s tours across the five boroughs, from Leo’s adventurous side enjoying Staten Island’s Chinese Scholar Garden, to Donnie learning at the Hayden Planetarium at the American Museum of Natural History.

Considered one of the most popular kids’ television programs of the 1980s, Teenage Mutant Ninja Turtles is a classic, global property created in 1984 by Kevin Eastman and Peter Laird. It first debuted as a successful comic book series and then became a hit animated TV show, a live-action television series and later spawned numerous blockbuster theatrical releases. Since its launch in 2012, Nickelodeon’s all-new CG-animated Teenage Mutant Ninja Turtles has re-energised these iconic characters of this wildly popular franchise. Currently in season five, Leonardo, Raphael, Donatello and Michelangelo have emerged in the anthology series, Tales of the Teenage Mutant Ninja Turtles, which follows the Turtles through a variety of action-packed and bizarre adventures that have never been seen before. The series is seen in over 170 countries and territories and translated in 45+ languages.

The Family Ambassador program was created in 2009 to help position New York City as a welcoming family-friendly destination, encourage families to visit year-round and invite those who have already visited New York City to return and enjoy all of the new attractions the City has to offer. The Teenage Mutant Nina Turtles are the eighth Family Ambassador after Dora and Friends in 2015, Curious George in 2014, Where’s Waldo? in 2013, The Muppets in 2012, The Smurfs in 2011, Dora the Explorer in 2010 and Sesame Street in 2009.

Email ThisBlogThis!Share to TwitterShare to FacebookShare to Pinterest
Labels: U.S.A.