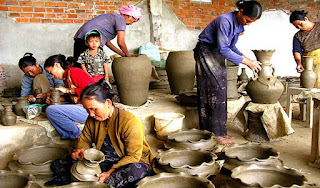 An exhibition showcasing ceramic and brocade products of the Cham people in central Ninh Thuan province, began in the Ponagar Tower centre in central Khanh Hoa province on June 9 as part of activities of the upcoming Khanh Hoa-Nha Trang Sea Festival 2017.

On display are nearly 1,000 ceramic products from the Bau Truc ceramic village, and 2,000 brocade products woven by artisans from the Cham ethnic group in the central province of Ninh Thuan.

Visitors can learn to make ceramic and brocade products.

The Ponagar Tower - a national history and culture relic site in the locality attracts dozens of thousand of believers and tourists for exercising religious practice and spending holidays every year, Thich said, adding that ceramic and brocade trade crafts of the Cham people are also widely introduced to visitors and locals.

This is the fifth time ceramic products from the Bau Truc ceramic village and woven brocade products of the Cham people in Ninh Thuan have been displayed in the Khanh Hoa - Nha Trang Sea Festival.

The festival, slated for June 10-13, is expected to greet about 150,000 domestic and foreign tourists.

Email ThisBlogThis!Share to TwitterShare to FacebookShare to Pinterest
Labels: Vietnam