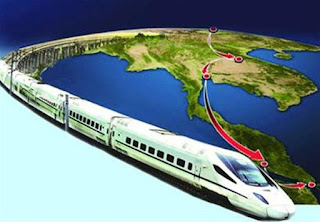 Prime Minister General Prayut Chan-o-cha has cited the Thai-Chinese high-speed railway project as an investment for the future, saying that the project would be carried out under the government-to-government basis.

The Prime Minister gave an explanation of the Thai-Chinese railway project in his national address on 23 June 2017. The explanation came after the Government invoked Section 44 of the Interim Constitution to clear technical and legal hurdles in order to expedite the project.

He stressed the need for Thailand to enhance its competitiveness and distribute wealth to the regional areas of the country. The project would link Thailand’s transportation networks with those of other countries in the framework of the "One Belt, One Road” initiative.

Thailand needs to carry out the railway links, along with its cross-continental highway networks. The Prime Minister said that Laos is now in the process of building a high-speed railway to be connected with that of Thailand. Therefore, Thailand should start the project now. It also needs to take into consideration the value of good relations with 64 countries in the framework of the One Belt, One Road initiative.

Both Thailand and China have already held 18 meetings to discuss joint investment in the project, which was initially set at 1.7 billion baht. The Prime Minister said that the standards of Chinese technology have been recognized and that the technology has also been used in many countries, including those in ASEAN.

As for technology transfer, the Prime Minister said that Thai engineers would join in planning the construction work and supervising the project. The issue must be further discussed and it is also included in the agreement of the project.

The Prime Minister stated that the Government and the National Council for Peace and Order needed to use Section 44 of the Interim Constitution in order that the project would proceed as planned. Delays in the project could result in lost opportunities for Thailand to become the regional center for connectivity with neighboring countries.
Posted by Max at 02:30