Noosa, the Relaxation Capital of Australia 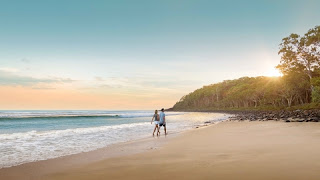 Tourism Noosa has launched a new winter campaign, 'Noosa, The Relaxation Capital of Australia', positioning the popular Queensland destination as a compelling holiday choice to its key interstate markets during the southern chill.

Tourism Noosa CEO Damien Massingham said the winter campaign targets high-yielding interstate visitors and is based on consumer research conducted in these markets.

“Our interstate visitor markets of Sydney and Melbourne are key for Noosa, spending more and staying longer than other visitors. We know that they love Noosa for its warm weather, great beaches and quality food experiences but we wanted to remind them that there is so much to see and do here and that regardless of how you relax on holiday, Noosa is where you'll find that perfect escape.”

“Whether people find relaxation on holidays by exploring and seeking outdoor adventure, sleeping in, enjoying a beachfront meal with friends, shopping or taking in a sunset, Noosa offers all of this and more. This campaign is all about the fact that Noosa is the place that can deliver the complete relaxation package.”

The tourism organisation engaged Cummins&Partners to work with on the campaign, following a national pitch process.

The campaign launches in Melbourne and Sydney next week, with a series of commercials appearing across cinema, catch-up television, digital and social, along with a range of print activity.

The campaign roll-out will also include a major brand activation from 26-28 June at Federation Square in Melbourne, featuring Noosa local and MasterChef favourite, Matt Sinclair, on Monday 26 June, conducting cooking demonstrations and talking up his home town as part of his role as a Visit Noosa Ambassador.