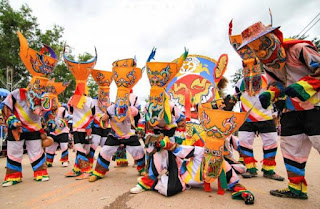 The Ministry of Culture will join hands with other government agencies and the private sector in organizing the unique annual cultural event "Phi Ta Khon,” or the Ghost Festival, in Dan Sai district, Loei province in the Northeast.

Permanent Secretary for Culture Kitsayapong Siri said that the Phi Ta Khon Festival this year will be held on 24-26 June in front of the Dan Sai District Office, along with an international traditional mask performance. The festival aims to sustain the inheritance of Thai art and culture, as well as local wisdom.

It is also intended to promote cultural tourism and enhance international relations through cultural exchange. There are many activities as part of the festival, such as the Phi Ta Khon mask contest, a recitation of the thirteen sermons of Phra Wetsandon (the story of a previous life of the Buddha), a food festival, a bazaar of community products, an exhibition of the festival, and a light and sound show.

More than 500 people from 11 local communities will take part in the festival as Phi Ta Khon performers. Joining the international traditional mask performance will be representatives from seven countries, namely Lao PDR, Cambodia, Indonesia, the Philippines, the Republic of Korea, India, and Thailand.

This festival is combined with Bun Bang Fai, or the Rocket Festival. Bun Bang Fai is a rainmaking rite and is also meant to worship the guardian of the city pillar. The rite is believed to bring about abundant rain, good crops, and happiness.

After the Phi Ta Khon Festival in Loei, the Ministry of Culture will bring the exhibition on the festival and the international mask performance to an event at the ASEAN Cultural Center on Ratchadamnoen Klang Avenue in Bangkok on 1-2 July 2017. Visitors are invited to attend the event free of charge.

Regarded as one of the most famous festivals in Thailand, Phi Ta Khon is an important folk and merit-making event in Dan Sai district. Many Thais from other areas of the country and foreign visitors also come to enjoy this merry occasion each year.

Phi Ta Khon has been registered as one of Thailand’s cultural heritage items in the social rituals and festivals category.
Posted by Max at 05:30