From London to Brisbane - The Royal Ballet has landed 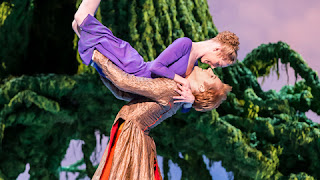 From London to Brisbane, The Royal Ballet has landed

The wait is over as members of The Royal Ballet arrive in Brisbane, in the Company's first Australian visit for 15 years.

Premier and Minister for the Arts Annastacia Palaszczuk welcomed The Royal Ballet to Queensland ahead of its residency at Queensland Performing Arts Centre (QPAC) as part of the acclaimed International Series.

“I know all Queenslanders join me in welcoming The Royal Ballet, which will present award winning productions of Woolf Works and The Winter's Tale, (29 June to 9 July 2017) at QPAC for the first time outside of the Company's home in London's Covent Garden,” she said.

“In addition, The Royal Ballet has travelled with the largest prop ever built by the Royal Opera House. The spectacular 9-metre high and 11-metre wide tree is a key set element in the production The Winter's Tale.

“I am proud that my Government through Tourism and Events Queensland has continued to support QPAC's International Series to enable the exclusive presentations of the world's best performance companies here in Queensland.

“In a wonderful addition to their QPAC performances, and in a first for the QPAC International Series, a contingent of the Company's dancers will also travel to Cairns for a one night only Gala performance in the Munro Martin Parklands on 12 July 2017.

“By extending the reach of QPAC's International Series and creating opportunities for cultural exchange across Queensland, it is building a tangible legacy for the state's cultural sector and for our communities and furthers Queensland's reputation as a vibrant cultural destination,” Premier Palaszczuk said.

Minister for Tourism and Major Events Kate Jones also welcomed Britain's flagship ballet company highlighting the benefits that nationally exclusive cultural events such as the season by The Royal Ballet bring to Queensland.

“Over the past seven years of the QPAC International Series, on average a third of season audiences travelled from outside of Brisbane to see performances stimulating visitation and the local economy in Queensland,” Minister Jones said.

“This year, Brisbane and Cairns will play host to ballet 'royalty' and we look forward to welcoming visitors to both cities for this extraordinary cultural program,” she said.

QPAC Chief Executive John Kotzas highlighted the broad program of events and activity that surrounds the season and is designed to offer audiences and the public a way to connect with the Company, the themes and relevance of the two works and their own creative practice.

“Through The Royal Ballet season we celebrate exquisite artistry and phenomenal athleticism as well as the role dance and movement plays in our everyday lives. It's no accident we have projects called We All Dance and Let's Dance!

“Dance and movement can strengthen our social connections, promote physical and mental health and create a lot of joy.

“We are committed to creating live performance experiences for all Queenslanders. Following the ballet's season at QPAC, an ensemble of dancers will travel to Cairns to perform a one night only Gala Performance in Munro Martin Parklands. The specially curated program will include a series of short solo and pas de deux works from Swan Lake, Romeo and Juliet and Don Quixote as well as others,” said Mr Kotzas.

For more information on The Royal Ballet season and associated program of free and ticketed events at QPAC please go to https://www.qpac.com.au/the-royal-balle

The Royal Ballet's Woolf Works and The Winter's Tale will run in the Lyric Theatre for an exclusive 2017 QPAC International Series season from 29 June to 9 July 2017. For tickets to these or any of the events mentioned visit qpac.com.au or 136 246