Summer is the most festive season in Tohoku. 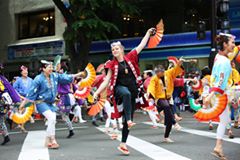 Summer is the most festive season in Tohoku. All around Tohoku there will be held six massive festival: Aomori Nebuta Festival, Akita Kanto festival, Iwate Sansa Odori Festival, Yamagata Hanagasa Festival, Sendai Tanabata Festival, and Fukushima Waraji Festival. Each event has their own trait and uniqueness depict the origin of the festivals.


If you want to take a peek of what those festivals will be look like, you should come to the Tohoku Kizuna Festival held in Sendai on 10-11 June 2017. The festival launch to help boosting the revitalization of Tohoku area after the great east earthquake on 2011.

The festival takes place all around Sendai downtown area. You could see the exhibition and main stage at Nishi Koen Park, Taste the local gourmet from Tohoku at Kotodai Koen Park, and enjoy the six festival parade at Jozenjidori street.

The six summer festivals last year attract more than 6 million people in total. It’s a rare chance to see all of them at one time.

Email ThisBlogThis!Share to TwitterShare to FacebookShare to Pinterest
Labels: Japan