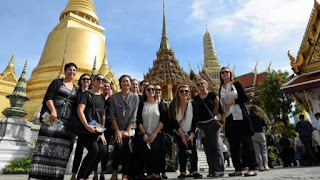 The Ministry of Tourism and Sports is confident that international tourist arrivals in 2017 will reach 35 million, compared to 32.59 million in 2016. In the overall picture, Thailand’s tourism situation is improving.

Permanent Secretary for Tourism and Sports Pongpanu Svetarundra said that, from January to May this year, Thailand welcomed 14.6 million foreign tourists, accounting for an increase of 3.2 percent over the same period of last year.

As for the diplomatic row between Qatar and other Arab countries, the Ministry of Tourism and Sports believed that the situation would affect the Thai tourism industry for only a short period. The Ministry is closely monitoring the possibility of the strengthening of the Thai baht, as this would affect tourist spending.

Speaking at a seminar on the potential of the Mukdahan Special Economic Zone, President of the Tourism Council of Thailand Ittirit Kinglake stated that tourism in Mukdahan in the Northeast has been growing. The number of Thai and foreign tourists visiting Mukdahan was 1.8 million in 2015, accounting for an increase of 25 percent over that of the previous year.

He said that Mukdahan had developed transport infrastructure that attracts tourist arrivals, as well. Moreover, the Second Thai-Lao Friendship Bridge connecting Mukdahan with Savannakhet in Lao PDR serves as a link between Thailand and neighboring countries. In the future, Mukdahan is expected to become a major tourist destination that distributes wealth to nearby provinces. The Vietnamese are among the largest groups of foreign tourists to Mukdahan.

Meanwhile, the Tourism Authority of Thailand, in cooperation with the Thai tourism industry, is hosting the Thailand Travel Mart Plus Amazing Gateway to the Greater Mekong Subregion 2017. The event is taking place from 14 to 16 June at the Chiang Mai International Exhibition and Convention Center in Chiang Mai province.

It aims to promote the tourism and service business sector in Thailand and the Greater Mekong Subregion counterparts. The major buyer markets include Europe, Southeast Asia, Eastern Asia, the United States, Australia, and New Zealand, as well as emerging markets, such as the Commonwealth of Independent States, Eastern Europe, Middle East, South America, and South Africa.
Posted by Max at 04:30