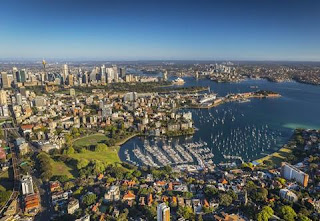 Images of Sydney’s popular tourist attractions and experiences will be seen by around 220 million Chinese television viewers when the latest season of the popular Chinese reality TV show Divas Hit the Road goes to air.

The top-rating program on Hunan TV features Chinese celebrities travelling overseas, taking part in incredible experiences, on limited budgets, without the help of assistants or agents.

The episode which features the celebrities in Sydney, will showcase the stars arriving at Sydney Airport, travelling to Circular Quay via public transport, catching a water taxi to Darling Point, and taking part in a sailing lesson at the Cruising Yacht Club of Australia at Rushcutters Bay.

The filming, which took place in March, was supported by Destination NSW.

Divas Hit the Road is now in its third season and airs in a prime time slot on Sunday nights in China, with the Sydney episode to air on 25 June.

Click here for more information.
Posted by Max at 01:00