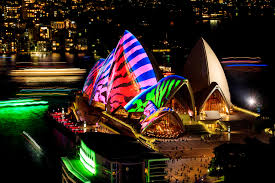 Royal in-laws and newly-weds, Pippa Middleton and James Matthews, shone a global spotlight on Vivid Sydney last week, while enjoying their honeymoon in the Harbour City.

Their activities included a morning jog in the Royal Botanic Garden Sydney, exploring Sydney Harbour by water taxi and a sea plane flight to Cottage Point Inn for lunch.

Pippa’s visit occurs prior to that of brother-in-law, Prince Harry, who is due in Sydney this week to officially launch the countdown to the 2018 Invictus Games.