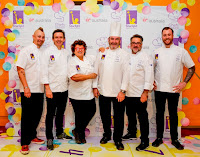 Last Thursday it was all about bringing the joy of childhood back to seriously ill children and their families at Melbourne’s Starlight Five Chefs Dinner, proudly sponsored and hosted by the Melbourne Convention and Exhibition Centre (MCEC) for the sixth consecutive year.

MCEC’s Executive Chef, Peter Haycroft was also on hand to create a delicious array of canapés, and said the evening was always an incredibly special event for him and his own team of chefs.

“A Starlight Five Chefs Dinner is not your standard gala event. Each dish we plate up is supporting Starlight’s community programs in Victoria, which help replace pain, fear and stress with fun, joy and laughter for sick kids and their families. It’s incredibly moving and inspiring to know that each meal we serve is another smile on a sick child’s face.

“We love opening up our kitchen to the five celebrity chefs and their assistants. My team are not only given the opportunity to work alongside some of the very best in our industry, but also the chance to deliver a world-class menu for a very special cause,” Mr Haycroft said.

“Starlight Five Chefs Dinners are only made possible thanks to the generosity of everyone involved. Almost every element of the event is donated thanks to MCEC, the talented chefs, generous suppliers and sponsors, which means more of every dollar raised goes directly towards giving the joy of childhood to seriously ill children at a time they need it the most,” Mrs Baxter said.

Guests were treated to an inspirational speech from Paralympian and proud Starlight ambassador, Dylan Alcott OAM, who spoke about the positive and long-term impact of his Starlight Wish at the age of eleven.

“When a once-bright life becomes dulled by illness, hospital and treatment, Starlight is there to help children smile again and re-discover the joy of childhood. Last night we were able to show our guests the amazing joy and happiness their support brings to seriously ill children and their families,” Mrs Baxter added.

Established in Sydney in 1993, the Starlight Five Chefs Dinner events have an impressive alumni of some of Australia’s most celebrated chefs and wineries.
Posted by Max at 01:00