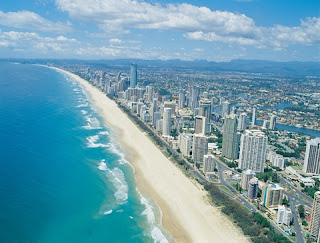 The Gold Coast welcomed a record 3.9 million domestic overnight visitors in the last year, according to the latest national visitor survey.

Strong growth of 7.5 per cent from the March quarter 2016 to March 2017, shows the Gold Coast's continued popularity as a destination for holidaying Australians, Gold Coast Tourism chair Paul Donovan said.

“We had a period impacted by Cyclone Debbie as well as the Easter holidays moving out of that quarter compared with the year before,” Mr Donovan said.

“But the resilience of the destination is demonstrated not only in the total number of visits but also by the fact that domestic overnight total expenditure was up 3.5 per cent to $3.05 billion.”

The Gold Coast figure reflects record growth in visitor numbers for Australia (up 3.1%) and Queensland (up 4.3%) for the same March-ending year. The previous high for the Gold Coast was 3.8m overnight domestic visits.

The total number of domestic nights spent on the Gold Coast by visitors hit 14.3 million, with the average length of stay stable at 3.7 nights.

Mr Donovan said however, the tourism sector would not rest on its laurels.

“This is a particularly important year for the Gold Coast as we lead into the 2018 Commonwealth Games.

“We are very appreciative of the record funding allocated to Gold Coast Tourism by the City of Gold Coast council and that is a clear green light to market the destination with extra vigour.

“We have seen a slight drop in day-trippers to the Gold Coast and the average length of stay for business events and conferences is also a little softer. So even within those overall positive figures there are segments where we have to continue to work really hard for success.

“It is an extremely competitive environment.”

The domestic results, combined with the international visitor numbers released a fortnight ago mean the Gold Coast hosted 13.23 million visitors in the 12-month period.

Please visit tra.gov.au for more information
Posted by Max at 00:00