Three Landmarks of Bangkok Listed among the Top Landmarks in Asia 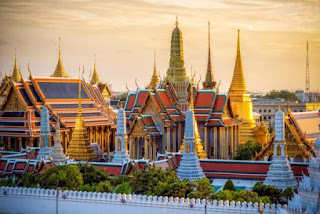 Three landmarks of Bangkok, namely the Temple of the Reclining Buddha, the Grand Palace, and the Temple of the Emerald Buddha, have been listed among the top "25 Landmarks in Asia” by the influential international travel website TripAdvisor in its 2017 Travelers’ Choice listings.

Tourists said that the Temple of the Reclining Buddha was "breathtaking” and "iconic” and "a true beauty to behold.” It also took 21st spot in the TripAdvisor Top 25 Landmarks in the World 2017. The Grand Palace is called "majestic” and the number one "must-see site” in Thailand. The Temple of the Emerald Buddha is described as "a treat for the eyes” and a "wonderful example of Thai architecture.”

The Temple of the Reclining Buddha, also known as Wat Pho, or Wat Phra Chetuphon, was built was built in the 17th century during the Ayutthaya period. The Reclining Buddha at this temple has long been regarded as one of Southeast Asia’s most impressive religious icons.

King Rama III of the early Rattanakosin period turned this temple into a major source of knowledge for all people. He ordered the collection of knowledge from wise men and the collection of arts and sciences on various subjects, such as traditional medicine, archeology, literature, and poetry. These subjects were inscribed on thousands of stone tablets on the walls and columns of cloisters around the temple.

Soon the Temple of the Reclining Buddha became the first "open university" in Thailand, and it is now recognized as a center for traditional Thai massage, where people can learn techniques of various natural remedies for health.

The Grand Palace, built in 1782, is one of Thailand’s most revered heritage sites. In the past, the palace was not only the royal residence, but also served as the administrative center of the country, where the king performed official duties and various royal functions.