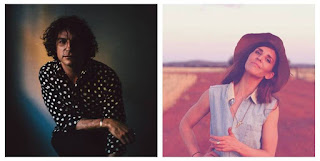 Australian folktronic artist Tobias and CMC and Golden Guitar award winner FannyLumsden are excited to announce they have teamed up with Rotary, and will be taking their music out on the road in July for 4 exciting shows in Central West QLD.

A mutual love and respect forAustralian music and community has motivated these two celebrated artists to join forces and meet the Australian live outback audiences head on. Both Tobias and Fanny Lumsden have enjoyed much success having various singles receiving national airplay on Australian radio, along with performing at festivals throughout Australia, and sharing the stage with some of the country’s biggest names.

Tobias and Fannyn Lumsden will be kicking off their shows in Longreach on Thursday 20th July and will be making their way through a host of venues including small halls, ending the tour in the small outback town of Yaraka on Sunday 23rd July, a town boasting a population of just over 100 people! "What I love about performing music in Australia is connecting with the communities I travel too. I think both my music and Fanny's will really resonate with these audience. It’s also really exciting to team up with an organization like Rotary, it's a wonderful feeling being able to give back to a community and participate in bringing people together rather than being the 'attraction' of an event" says Tobias.

Tobias and Fanny Lumsden met when they both performed at the 2016/2017 Woodford Folk Festival and discussed the importance of not only sharing music, but using music to help community organizations for local causes that many of us may be unaware of on the east coast of Australia, like the drought. No stranger to playing to Country audiences, Fanny is looking forward to the shows in July - "we can't wait to get out and swap some stories with the folks of central Queensland! These are my favorite types of shows and it will be the first time we have got the chance to get out there and share our music!' says Fanny.

As fortuitous as meetings go, it was at a house concert in sleepy Maryborough, Qld when a Rotary member saw Tobias perform. Knowing he would be perfect for a project they were hatching, Tobias was quickly introduced to Longreach Rotary President David Phelps, and thus the idea was created. David Phelps stated this project is close to his heart and is looking forward to seeing the impact it will have on communities. "It means a lot to have Tobias and Fanny Lumsden heading out west on their drought relief tour. They will bring families and communities together who have been facing tough times for five years now. We don’t know when this drought will end, but the big rains will come eventually. The wait is easier when we know we have the support of people like Tobias and Fanny Lumsden — and yourselves in towns and cities all around Australia".

David is hoping that through these concerts they will be able to generate funds and much needed awareness for the West QLD Drought Appeal, which supports people in remote areas affected by the long drought. "They will also show how everyone can let farm families and communities know that you care, by donating to the Western Queensland Drought Appeal. The appeal is a charity established by people living the drought, for the benefit of families right across the outback", said David.


Concerts in Ilfracombe, Isisford and Yaraka are free entry. Please arrive early to guarantee your seat.

Tickets to the Longreach concert are FREE – registrations are essential. Click here to register.
Posted by Max at 04:00