China's much-anticipated high speed rail line between Beijing and Shanghai will commence tomorrow on Friday July 1 when trains go into commercial operation for the first time. A ceremony was held today, on June 30, to mark the opening of the new high-speed rail link.
The new link has taken less than 3 years to build, and has been operating on a trial basis since mid-May,

The high speed train will travel at a speed of 300kph (186mph)  The new link will cut the 820 mile journey between the two cities of Beijing and Shanghai in half to four hours and 45 minutes, which is two hours less than the present train journey. The new fast train is designed to carry 80 million passengers a year
The other alternative of travelling from Beijing to Shanghai is to fly, and this takes about two hours. However, travel to the airports is time-consuming, and the busy air route is often subject to weather and air traffic delays and cancellations. This makes the new high speed train travel an attractive option.

One-way ticket prices will range between 410 yuan and 1750 yuan ($61 and $259), vice rail minister Hu Yadong said last week, compared to about 193 yuan for a flight between the two cities. With its fully reclining airline-style business class seats,
He Huawu, the chief engineer of the Chinese Railway Ministry said China was in leading the world in the industry. "Countries that are currently building high speed railways can draw on the experience of China, such as its standards, construction ability and integration methods. The United States is also building its high speed railway network. We have signed the deal with them," he said. 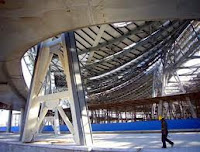 Beijing’s South Railway Station is a remarkable new strcture, with a vaulting glass dome propped up on steel stilts that looks like a flying saucer has just landed from outer space
Here are some statistics about the new high speed rail link between Beijing and Shanghai:- 21 - tunnels on the line; 24 - stations en route; 288 – bridges;  I hope one day to travel on this remarkable new fast train in China so that I can write an article on my travel experience
Posted by Max at 18:00

Email ThisBlogThis!Share to TwitterShare to FacebookShare to Pinterest
Labels: China