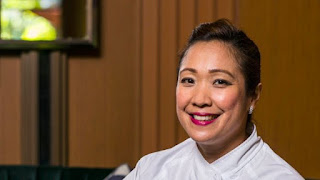 “Can you lift a bag of flour?”

“Are you sure you can do this?”

These were some of the daily taunts Chef Bettina Arguelles faced for the umpteenth time stepping into the kitchen. It did not take long for Bettina to realize that if she wanted to become a top chef in a male-dominated industry, she would need to create her own seat at the table.

From the outside, it would appear that Bettina has it all – she has made the cut in the culinary scene and is blessed with a beautiful family – but running a kitchen whilst managing her family has not been smooth sailing. “I have experienced very difficult moments, some decisions about my career have been difficult to make,” she explains. Born and raised in the Philippines, Bettina grew up in a family with stretched resources and culinary school was a luxury they could not afford. After graduating with a degree in Mass Communications instead, she found herself working in the advertising industry yet still yearning for greater fulfilment of her passion for cooking.

When her husband was offered the opportunity to work in Japan in 1998, Bettina was excited about the relocation, believing it would take her on a new adventure. However, bereft of Japanese language skills, she struggled to fit in and accomplish even the most basic of tasks such as telling salt from sugar at the supermarket. Compounded by the societal pressure to be a stay-at-home mother, Bettina found herself lacking purpose and struggling with her self-worth. At the same time, many of her peers back home had already achieved managerial roles which made Bettina feel even more discouraged, prompting the family to decide that their journey in Japan had come to an end.

As they sought out opportunities in a country which better suited their lifestyle, Bettina's husband promptly found a position he could fill in Singapore. This time, Bettina did not want to just relocate as a trailing spouse. Instead, she had a game plan to turn her passion of cooking into reality. After some thorough research, she hoped to enrol herself into the At-Sunrice GlobalChef Academy in Singapore. However, the school fee of $40,000 was far too pricey for a young family like hers. Compelled to help his wife accomplish her dream, Bettina's husband took out a loan for this purpose. Grateful and empowered, Bettina was finally able to kickstart her professional journey into the culinary world.

While training at the At-Sunrice GlobalChef Academy, Bettina took up a job as a Culinary Apprentice at The Fullerton Hotel Singapore under the tutelage of celebrated food professionals. She was later promoted to Demi Chef and was offered a once-in-a-lifetime opportunity to serve the world-renowned chef and restaurateur, Daniel Boulud, on his visit to the hotel. As a budding chef, one of the books that inspired Bettina was “Letters to a Young Chef” by Daniel Boulud. Meeting with Daniel in person, Bettina was smitten by his larger-than-life personality and immense talent, and she grasped the opportunity to boldly ask for Daniel's autograph. This critical moment eventually landed her a role at the prestigious fine dining establishment, DB Bistro Moderne in New York where she flourished. She was later transferred back to Singapore where she held a pivotal role as a pre-opening member of DB Bistro Moderne at Marina Bay Sands, a significant turning point in Bettina's career. Unsurprisingly, things began to fall into place – she was invited to assume the role of Restaurant Operations Chef at Sofitel Philippine Plaza Manila and subsequently Chef de Cuisine at Sofitel Singapore Sentosa Resort & Spa, before joining the pre-opening team at InterContinental Singapore Robertson Quay as Executive Sous Chef in 2017.

As her career continues to gain momentum, Bettina still holds closely to her core value of family. One of the most fulfilling aspects of her job is creating memories for the families who dine at her restaurant. “There's an elderly man who would always bring two of his grandsons here, to Publico Ristorante, for Sunday brunch every week without fail. The two young boys would always listen intently as their grandpa spoke animatedly over eggs and toast. As they grow older, the boys may not remember the content of their conversation, but they will certainly remember the feelings they had of spending precious time enjoying brunch with their grandpa,” Bettina recounts, treasuring such moments she is able to be a silent participant to.

Despite Bettina's many successes, she has also had her fair share of disappointments. “My children were growing up very rapidly as I was carving out a niche for myself in the culinary industry, so I missed a lot of key moments in their lives. Creating that balance was difficult as a burgeoning chef with many moments missed and time lost that I wish I could take back. I remember vividly the scene of my daughter being left disappointed and in tears on her prom night over a long-distance Skype call. She had an arrangement with my husband to take her to prom, but my husband had to leave the country on a last-minute work assignment. In that moment, I wished I could fly back home to be with her, and tears rolled down my cheeks as I topped up the food over the buffet counter,” Bettina recounts as tears welled up in her eyes. Although sacrifices are inevitable to progress in her career, Bettina counts herself blessed with an unfailingly supportive husband and understanding children who continue to inspire her to pursue her dreams. To thank them for seeing her through, Bettina is even more committed to giving back to her family and spending more quality time with them.

Success in the culinary arts has been hard-won for Bettina. At the age of 30, with additional commitments to her family, most people would say it is too late for Bettina to start a career in a professional kitchen. Still, Bettina was hungry to learn and become better, and with sheer determination and will, she was able to prove herself no less than her younger, physically fitter cooks in residence. 14 years after taking a leap of faith, Bettina has now been promoted to the role of Executive Chef at InterContinental Singapore Robertson Quay, joining the ranks of just a handful of other women who have made history in Singapore's culinary scene. Her illustrious career has seen her bagging coveted awards accorded by Food & Hotel Asia, Culinaire Malaysia and The Philippine Culinary Cup.

At present, Bettina oversees Publico Ristorante in addition to all-day eatery, Marcello, also located at InterContinental Singapore Robertson Quay. Apart from innovating and revitalising the menus with her signature touch, she also manages the smooth running of all food-related operations and teams across the hotel. This includes the seamless management of the hotel's in-room dining, Club InterContinental, and meetings & events culinary operations. Having accomplished this level of expertise, it is no wonder that Bettina was also most recently nominated as Chef of the Year (Female) in the World Gourmet Awards 2019.

By Janice Tan and Giselle Goh

Email ThisBlogThis!Share to TwitterShare to FacebookShare to Pinterest
Labels: Singapore