Discover Athens through your senses 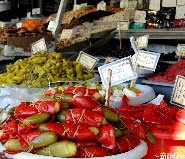 You may already know that the most important site of Greece, the Parthenon, is located in its capital, Athens. You might not know though that Athens city center is one of the best places to tantalise your taste buds and learn all about the Mediterranean dieSituated at the crossroads connecting the East with the West, Greece has been influenced by both worlds and over the centuries has developed its own cuisine which has become world famous for the freshness of the materials used, the elaborate recipes, and the rich tastes of the dishes prepared.

Greece is known for its delectable healthy cuisine. Every day, a part of these treasures finds its way to the Athenian shops and food markets in a raw or preserved form and contributes to an ever-changing kaleidoscope of colours, tastes and aromas. Cheese from Iperus, sausages from Thessaly, wine from the Peloponnese, sun-dried tomatoes from Santorini, herbs from Crete, pastries from Corfu, olives from Lesvos. In Athens you can find it all!

Adding to this fine selection of gastronomic treasures coming from all over the country, there are numerous delicacies produced by local food artisans the consumption of which constitutes part of the daily regimen of the residents of Athens. Pastries and pies, sweets and beverages, Athenians have invented a thousand and one ways to keep their taste buds busy.

If you want to entice your senses and learn about Greek gastronomy you can take a guided food tour with Athens Insiders, a group of young and food-wise people who love sharing the best of their country with visitors.
Posted by Max at 00:30

Email ThisBlogThis!Share to TwitterShare to FacebookShare to Pinterest
Labels: Greece